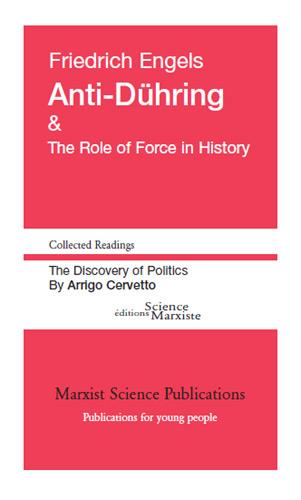 Anti-dühring & the role of force in history (édition en anglais)

There is ample evidence that this work played an essential role in forming generations of Marxists. A. Labriola, in Socialism and Philosophy (1897) wrote : « Anti-Dühring is that work which ought to get an international circulation before any other. I know of few books which are equal to it in compactness of thought, multiplicity of viewpoints, and effectiveness in bringing home its points. It may become mental medicine for young thinkers, who generally turn with vague and uncertain touch to books which are said to deal with socialism of some kind. » D. Riazanov, in a conference on Marx and Engels, said that : « Thanks to it, the young generation who became militants around 1876-1880 learnt the true nature of scientific socialism, its philosophical principles, and its methods. Anti-Dühring is the best introduction to the study of Capital. » Anti-Dühring was a weapon in the theoretical and political struggles against ecclecticism. The working-class movement got over its first infantile disorder thanks to this work of Engels and Marx - a work that did not remain shut up in some intellectual ivory tower, but became « science translated into militancy, to become struggle ».