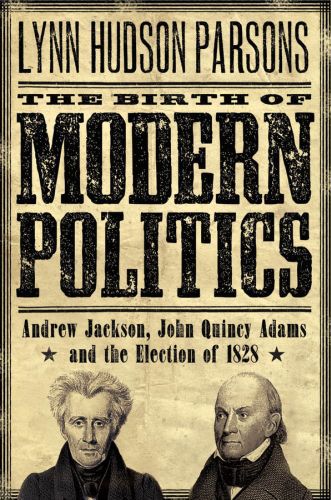 The 1828 presidential election, which pitted Major General Andrew Jackson against incumbent John Quincy Adams, has long been hailed as a watershed moment in American political history. It was the contest in which an unlettered, hot-tempered southwestern frontiersman, trumpeted by his supporters as a genuine man of the people, soundly defeated a New England "aristocrat" whose education and political resume were as impressive as any ever seen in American public life. It was, many historians have argued, the country's first truly democratic presidential election. It was also the election that opened a Pandora's box of campaign tactics, including coordinated media, get-out-the-vote efforts, fund-raising, organized rallies, opinion polling, campaign paraphernalia, ethnic voting blocs, "opposition research," and smear tactics.

In The Birth of Modern Politics, Parsons shows that the Adams-Jackson contest also began a national debate that is eerily contemporary, pitting those whose cultural, social, and economic values were rooted in community action for the common good against those who believed the common good was best served by giving individuals as much freedom as possible to promote their own interests. The book offers fresh and illuminating portraits of both Adams and Jackson and reveals how, despite their vastly different backgrounds, they had started out with many of the same values, admired one another, and had often been allies in common causes. But by 1828, caught up in a shifting political landscape, they were plunged into a competition that separated them decisively from the Founding Fathers' era and ushered in a style of politics that is still with us today.