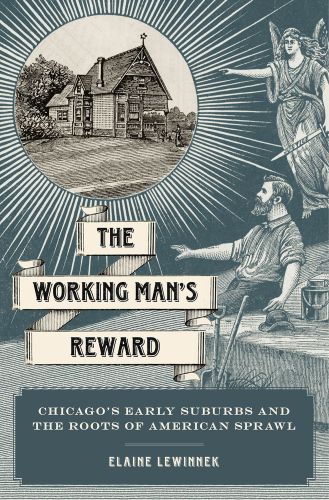 The Working Man's Reward: Chicago's Early Suburbs and the Roots of Ame

Between the 1860s and 1920s, Chicago's working-class immigrants designed the American dream of home-ownership. They imagined homes as small businesses, homes that were simultaneously a consumer-oriented respite from work and a productive space that workers hoped to control.
Stretching out of town along with Chicago's assembly-line factories, Chicago's early suburbs were remarkably socially and economically diverse. They were marketed by real estate developers and urban boosters with the elusive promise that homeownership might offer some bulwark against the vicissitudes of industrial capitalism, that homes might be "better than a bank for a poor man" and "the working man's reward." This promise evolved into what Lewinnek terms "the mortgages of whiteness," the hope that property values might increase if that property could be kept white. Suburbs also developed through nineteenth-century notions of the gendered respectability of domesticity, early ideas about city planning and land economics, and an evolving twentieth-century discourse about the racial attributes of property values. Looking at the persistent challenges of racial difference, economic inequality, and private property ownership that were present in urban design and planning from the start, Lewinnek argues that white Americans' attachment to property and community were not simply reactions to post-1945 Civil Rights Movement and federally enforced integration policies. Rather, Chicago's mostly immigrant working class bought homes, seeking an elusive respectability and class mobility, and trying to protect their property values against what they perceived as African American threats, which eventually flared in violent racial conflict.
The Working Man's Reward examines the roots of America's suburbanization in the late nineteenth and early twentieth centuries, showing how Chicagoans helped form America's urban sprawl.