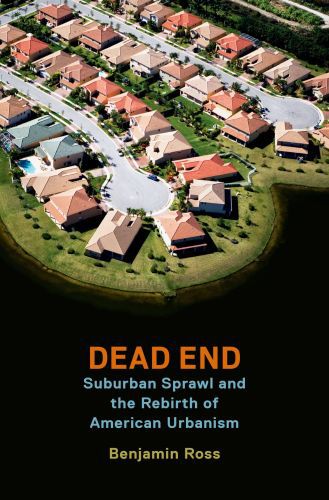 Dead End: Suburban Sprawl and the Rebirth of American Urbanism

More than five decades have passed since Jane Jacobs wrote her classic The Death and Life of Great American Cities, and since a front page headline in the New York Times read, "Cars Choking Cities as 'Urban Sprawl' Takes Over." Yet sprawl persists, and not by mistake. It happens for a reason.
As an activist and a scholar, Benjamin Ross is uniquely placed to diagnose why this is so. Dead End traces how the ideal of a safe, green, orderly retreat where hardworking members of the middle class could raise their children away from the city mutated into the McMansion and strip mall-ridden suburbs of today. Ross finds that sprawl is much more than bad architecture and sloppy planning. Its roots are historical, sociological, and economic. He uses these insights to lay out a practical strategy for change, honed by his experience leading the largest grass-roots mass transit advocacy organization in the United States. The problems of smart growth, sustainability, transportation, and affordable housing, he argues, are intertwined and must be solved as a whole. The two keys to creating better places to live are expansion of rail transit and a more genuinely democratic oversight of land use.
Dead End is, ultimately, about the places where we live our lives. Both an engaging history of suburbia and an invaluable guide for today's urbanists, it will serve as a primer for anyone interested in how Americans actually live.